Baby was the beginning of Helen McIntyre's stuffed animal collection as an adult. After "Baby" she bought tens, if not hundreds, of stuffed animals. In her later life, she bought many of them at the gift shop at Northwestern Hospital.

At her death, all of her stuffed animals were given away, many to her great grand children and David Cohen took a number of them. She said she thought she bought "Baby" at Marshall Field's in Evanston.

"Baby" traveled everywhere with Helen and is pictured at Helen and Larry's 50th wedding anniversary party.

Helen would change "Baby's" clothing. When she died, "Baby" was wearing a tee shirt that reads "Life is a Beach, Then you Drown." He also had a small green "JFK" pin on. Often Helen would tie a ribbon around one of his ears. "Baby" now lives with Helen's daughter. 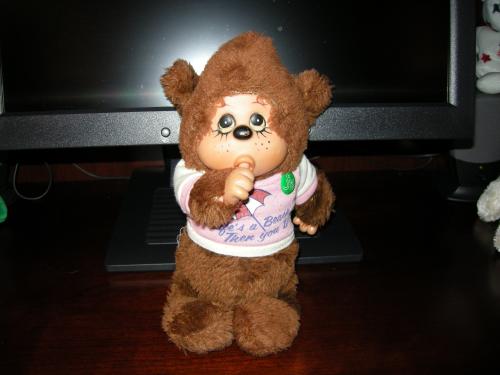