The passport was issued to Thomas J. McIntyre and his family in June 1923 in preparation for a trip to Ireland. Thomas, his wife Ellen and their five children all traveled on the one passport.

Thomas with his family and Thomas' sister Mary Egan, sailed from New York aboard the ship Caronia on June 30, 1923 to visit their parents, Lawrence and Mary McIntyre, in Lislea, County Sligo. The intent was for Thomas to take over the family farm, which, as oldest son, was the common thing to do.

However, I have been told that Thomas' father, Lawrence, asked Thomas to give him 100 pounds so Lawrence could use it for the dowry for one of Thomas' unwed sisters. Thomas balked and after visiting his parents for several weeks he collected up his family and set sail for the US.

The family left Ireland from Cobh, County Cork, on September 2, 1923 on the Ship Baltic and sailed into New York Harbor on September 8, 1923, stopping at Ellis Island before returning to Chicago.

The passport was framed by Thomas' son, Fr. Tom McIntyre, and given to Elaine Beaudoin when she visited Fr. Tom in California around 2000. 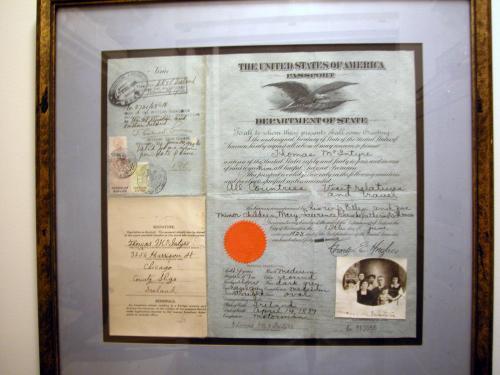