This brass statue of a lamp lighter (or street urchin lighting a cigarette?) on Rue Barrée was once an electrical lamp that sat on a table near Nell Sullivan's front door in the living room of her home at 18 N. Latrobe, Chicago.

The plaque on the front reads: GAVROCHE, Par A. de Ranieri (Statuaire).

The works of sculptor Artiste de Ranieri are in a special collection held by the Musée Labenche d'art et d'histoire in Brive-La-Gaillarde, France.

On the back of the statue there is an imprint that reads: Made in Paris, France.

In looking up information on Gavroche, the only reference that can be found is to a street urchin named Gavroche in Victor Hugo's Les Miserables.

The statue stands 17 inches tall; its age is unknown. It is unlike any other items in Nell's home, so it might have been a gift. Her brother, John, was in France during WWI and may have brought it home, but it is only a guess. It is known to have been in her home during the 1950s and 1960s. 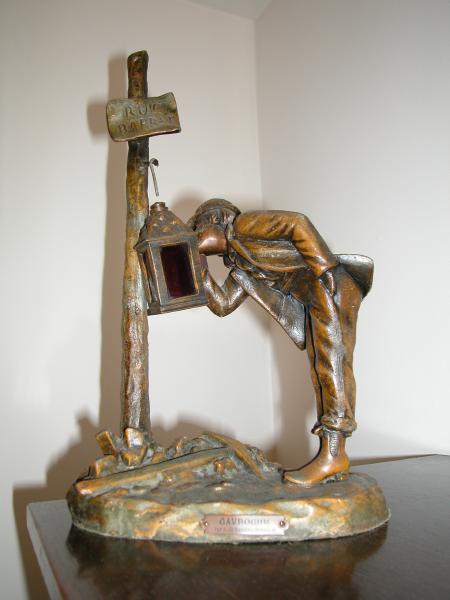