On a sunny day in 1991 two hikers, Erika and Helmut Simon, from Nuremberg in Germany, were walking in the Ötztal Alps. Descending from the Finail peak in the Tisenjoch area, the Simons decided to take a shortcut and left the marked footpath. As they walked past a rocky gully filled with meltwater, they noticed something brown on the gully bed. At first they thought it must be some sort of rubbish, but on closer inspection they realized with horror that they had discovered a human corpse.

The Iceman is one of the oldest mummies in the world. However, it is not only his historical age that makes him particularly valuable for scientists but also the way in which he was mummified. Ötzi is a so-called “wet mummy”, i.e. one in which humidity is retained in individual cells. The body tissue is elastic and suitable for performing detailed scientific investigations. Moreover, he is a natural mummy, unaltered by burial rites or other interventions. The Iceman with his complete clothing and equipment provides a snapshot of Stone Age life in Europe.

By current estimates, at the time of his death Ötzi was approximately 5 ft 5 in tall, weighed about 110 pounds and was about 45 years of age. When his body was found, it weighed 13.750 kg. Because the body was covered in ice shortly after his death, it had only partially deteriorated. Analysis of pollen, dust grains and the isotopic composition of his tooth enamel indicates that he spent his childhood near the present village of Feldthurns, north of Bolzano, but later went to live in valleys about 50 kilometres further north. His lungs were blackened, probably from breathing the smoke of campfires. Analysis by Franco Rollo's group at the University of Camerino has shown that Ötzi's mitochondrial DNA belongs to the K1 subcluster of the mitochondrial haplogroup K, but that it cannot be categorized into any of the three modern branches of that subcluster. Rollo's group published Ötzi's complete mtDNA sequence in 2008.

A person’s maternal ancestry is traced by mitochondrial DNA or mtDNA for short. Both men and women possess mtDNA, but only women pass it on to their children..

Research at Oxford University and elsewhere over many years has shown that all of our maternal lines are connected at some time in the past and that these connections can be traced by reading mtDNA. One striking finding was that people tended to cluster into a small number of groups, which could be defined by the precise sequence of their mtDNA. In native Europeans, for example, there were seven such groups, among Native Americans there were four, among Japanese people there were nine, and so on. Each of these groups, by an astounding yet inescapable logic, traced back to just one woman, the common maternal ancestor of everyone in her group, or clan.

For many of the ancestral mothers, and there are about 36 world-wide, we know whereabouts they lived and how many ten of thousands of years ago. DNA changes very slowly over time and this is what we use to calculate how long ago the clan mothers lived. By studying features of the geographical distribution of their present-day descendants, we can work out where they lived as well. To emphasize that they were real individuals, we have given them all names and, using archaeological and other evidence, we have reconstructed their imagined lives.

Everyone in the same clan is a direct maternal descendant of one of these clan mothers and carries her DNA within every cell of their body. Your mtDNA actually helps cells use oxygen – so you are using your clan mother’s mtDNA every time you breathe. However, not everyone in the same clan has exactly the same mtDNA, because DNA changes gradually over the generations. From your precise DNA result, we are able to assign you a place within the genealogy of the clan, which will be shown on your “Seven Daughters of Eve” or “World Clans” certificate.

The clan mothers were not the only people alive at the time, of course, but they were the only ones to have direct maternal descendants living right through to the present day. The other women around, or their descendants, either had no children at all or had only sons, who could not pass on their mtDNA. And, of course, the clan mothers had ancestors themselves. Amazingly, their genealogies have also been discovered. They show how everyone alive on the planet today can trace their maternal ancestry back to just one woman. By all accounts, she lived in Africa about 150,000 – 200,000 years ago and is known as “Mitochondrial Eve”. On your “World Clans” certificate you will see how you and your clan mother relate to all the others in the human family and to “Mitochondrial Eve” herself.

THE EUROPEAN CLANS – The Seven Daughters of Eve

The clan of Ursula
(Latin for she-bear)
is the oldest of the seven native European clans. It was founded around 45,000 years ago by the first modern humans, Homo sapiens, as they established themselves in Europe. Today, about 11% of modern Europeans are the direct maternal descendants of Ursula. They come from all parts of Europe, but the clan is particularly well represented in western Britain and Scandinavia.

The clan of Xenia
(Greek for hospitable)
is the second oldest of the seven native European clans. It was founded 25,000 years ago by the second wave of modern humans, Homo sapiens, who established themselves in Europe, just prior to the coldest part of the last Ice Age. Today around 7% of native Europeans are in the clan of Xenia. Within the clan, three distinct branches fan out over Europe. One is still largely confined to Eastern Europe while the other two have spread further to the West into central Europe and as far as France and Britain. About 1% of Native Americans are also in the clan of Xenia.

The clan of Helena
(Greek for light)
is by far the largest and most successful of the seven native clans with 41% of Europeans belonging to one of its many branches. It began 20,000 years ago with the birth of Helena somewhere in the valleys of the Dordogne and the Vezere, in south-central France. The clan is widespread throughout all parts of Europe, but reaches its highest frequency among the Basque people of northern Spain and southern France.

The clan of Velda
(Scandinavian for ruler)
is the smallest of the seven clans containing only about 4% of native Europeans. Velda lived 17,000 years ago in the limestone hills of Cantabria in northwest Spain. Her descendants are found nowadays mainly in western and northern Europe and are surprisingly frequent among the Saami people of Finland and Northern Norway.

The clan of Tara
(Gaelic for rocky hill)
includes slightly fewer than 10% of modern Europeans. Its many branches are widely distributed throughout southern and western Europe with particularly high concentrations in Ireland and the west of Britain. Tara herself lived 17,000 years ago in the northwest of Italy among the hills of Tuscany and along the estuary of the river Arno.

The clan of Katrine
(Greek for pure)
is a medium sized clan with 10% of Europeans among its membership. Katrine herself lived 15,000 years ago in the wooded plains of northeast Italy, now flooded by the Adriatic, and among the southern foothills of the Alps. Her descendants are still there in numbers, but have also spread throughout central and northern Europe.

The clan of Jasmine
(Persian for flower)
is the second largest of the seven European clans after Helena and is the only one to have its origins outside Europe. Jasmine and her descendants, who now make up 12% of Europeans, were among the first farmers and brought the agricultural revolution to Europe from the Middle East around 8,500 years ago.

The clan of Ulrike
(German for Mistress of All)
is not among the original “Seven Daughters of Eve” clans, but with just under 2% of Europeans among its members, it has a claim to being included among the numerically important clans. Ulrike lived about 18,000 years ago in the cold refuges of the Ukraine at the northern limits of human habitation. Though Ulrike’s descendants are nowhere common, the clan is found today mainly in the east and north of Europe with particularly high concentrations in Scandinavia and the Baltic states. 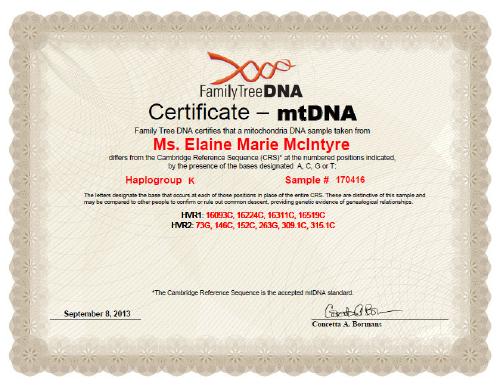 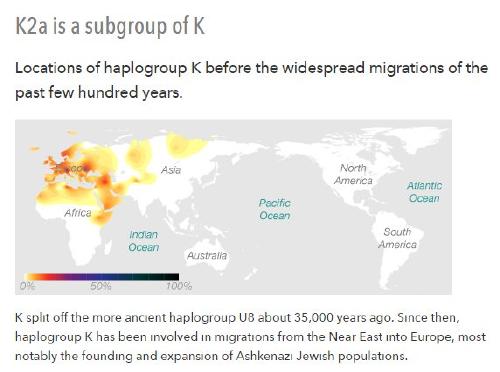 Elaine McIntyre mtdna report from 23&Me