This wonderful recipe was provided by Sally Ruane Gilger, second cousin to my Dad, Larry McIntyre. Sally, born in Carrowbeg, County Mayo, Ireland, now lives in Chicago.  Sally told me she brought the recipe with her when she came to the US from Ireland.

For family gatherings, Sally often makes this delicious bread. I've been lucky to take several slices home with me after events at her home. If the bread begins to stale, it makes very tasty toast. It also smell just wonderful both when it is baking and when it is later toasted. Enjoy.

Bring the mixture to a boil and boil for three minutes. Cool completely.

Make a well in the flour mixture and add the wet ingredients mixing just until flour is absorbed. Do not over mix. Pour into two 9-inch loaf pans that have been sprayed with Pam and dusted with flour.

Bake in a 325 degree oven for 45-55 minutes. Use a toothpick to test for doneness.  Cool for 10 minutes in pans. Turn bread onto a cooling rack and then turn right side up and let stand until completely cool.

Slice and spread with butter, eat!!!! 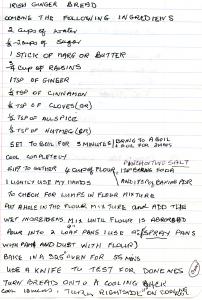