The photo of this wonderful heirloom was sent to me by Sal Bigone, descendent of Patrick McIntyre, in 2012.  He provides the following information on the object:

The photo in the center is of Mary Ann McIntyre Leonard [daughter of Patrick McIntyre, 1831-1901] and her son Andrew J. Leonard.  Sal believes Patrick McIntyre is in the upper corner and two of his sons in the lower corner. It was made by Maria Reyes Gonzalez Leonard, Andrew's wife, a little over a hundred years ago.

Patrick McIntyre died in 1901 and Andrew and Maria were married in 1903.  My guess is that this American flag covered crest was made sometime in this time period.  Perhaps, Sal Bigone has more information on a date.

In the email, Sal states "Isn't it something?"  And, my reply: Yes it is truly a wonderful heirloom.  What a gift that it has been preserved over the past 100 years. 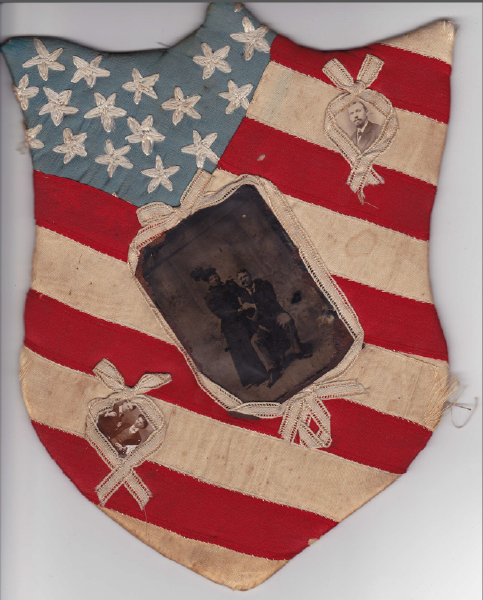